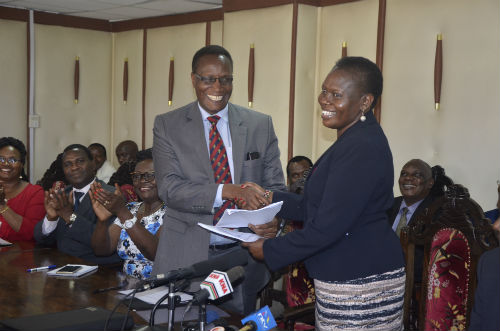 New Lands and Physical Planning CS, Ms. Farida Karoney has said that she is under no illusion that together with the Ministry staff, she would meet expectations of the public.

“We are even ready to work at odd hours in order to deliver services to the people.” She said.

Ms. Karoney spoke when she took over the land docket from the immediate former lands CS, Prof. Jacob Kaimenyi at Ardhi house, Nairobi.

“I am not worried about cartels. We shall make it if we all agree to serve the people with integrity,” She said.

The new Lands CS asked the National Land Commission (NLC) to put their past differences with the Ministry behind and work closely with it in order to deliver quality services to wananchi.

“If I step on your shoe let it not be blown out of context. We are all human so we shall collide at one time or the other. There are only a few issues on which we don’t agree so let’s look for solutions and’s focus on key priority areas.” She said.

In his remarks, his Prof Kaimenyi enumerated some of the achievements made at the ministry during his tenure as Cabinet Secretary.

Kaimenyi reported that the ministry managed to develop the National Spatial Plan which has put all resources under one roof.

“We also developed a National Land Use Policy meant to provide legal, administrative, institutional and technological frameworks for optimal utilization and production of land,” he said. “This is a key document which I wish you would launch in the shortest time possible.”

He said that the National Land Policy Use envisaged a situation where the Government holds or accumulate large stocks of land in various parts of the country for future use.

He said that National Land Value index bill is before parliament pending for approval.

“The bill will determine the cost of land in different parts of the country, in order to guide taxation on idle private arable land, leasing of idle Government land for commercial farming, agro-processing and manufacturing.” Said Prof. Kaimenyi.

He said this while emphasizing the protection of investors from fraud as costs rise when people learn of the government’s development plans in particular areas.

Kaimenyi said he also dissolved all land control boards and appointed new ones, as part of efforts to reform them.

The decision was made after it was established that most of the officials had served for too long and that there was male domination and lack of expertise.

He added: “They were earning a sitting allowance of Sh500 which we increased to Sh2, 500 and introduced a transport allowance. With this, we expect the boards to do better.”

Kaimenyi asked Karoney to map IDP camps so the people are effectively resettled as this is an expensive task that requires consolidation of efforts.

“Madam CS, you should endeavor to settle the squatters. If possible let them have their own title deeds. I know it is not easy but with the support of all the staff here all will be possible,” he told the new CS.

Kaimenyi also asked Karoney to ensure enforcement of the Community Land Act which covers how to manage community land and issue compensation for it.

On title deeds, he noted the Jubilee government had since 2013, issued 3.2 million land titles across the country as promised in their manifesto.

The former Minister said that there is “great need” to establish a land bank for investors to feel secure as speculators will be done eliminated.

He said that creation of strategic land bank will facilitate affordable housing, and curb speculation on land.